February 20th was a wild day! It started at 8:00 am at UVU and continued on until nearly 10:00 pm. For the first time I attended the Rocky Mountain Summer Stock Theater Auditions (RMSSTA). At this event, a number of regional summer stock theaters join together for a mass open audition to cast their summer shows. 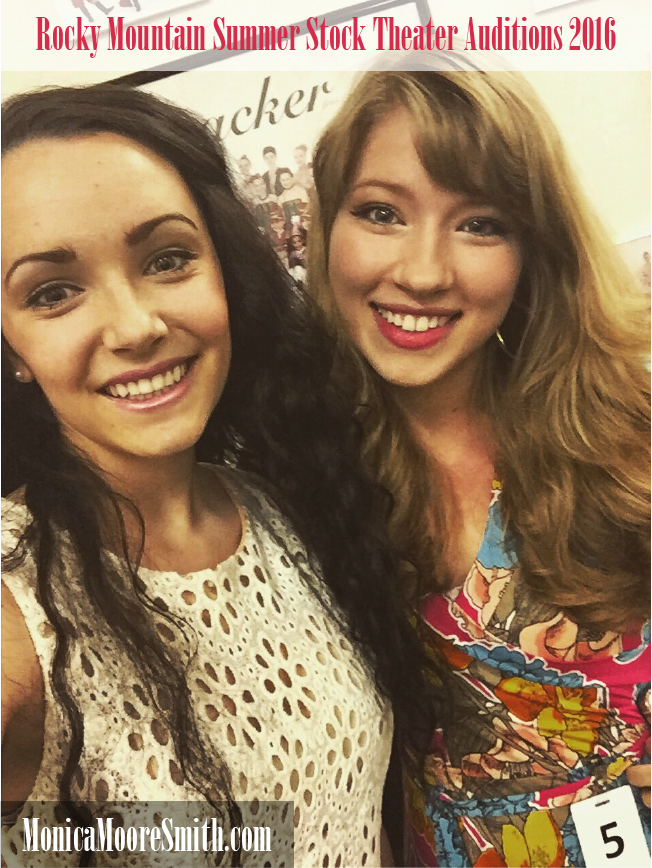 It started with an actor meeting, followed by three and a half hours of auditions. We then had a lunch break followed by more auditions and then both dance and vocal callbacks at the discretion of each company.

There were 11 companies in attendance this year. I was asked for ten callbacks from seven companies. (I was auditioner #12.) It was a crazy day, with some callbacks going overtime and overlapping with others, etc. Some singing, some dancing, some interviews, some cold reads. Even if you never wanted to do musical theater, this is a great crash course in auditioning! The image above is me with my old friend Summer Sloan at the second (third?) Lagoon callback. It was held a couple of weeks after the RMSSTA cattle call. (Summer and I were in the film Jonah and the Great Fish together years ago.)

Ultimately I was given offers from five of the companies. It was an honor to have so much interest. Some of the parts were amazing and challenging. One company offered the opportunity to perform in four rotating shows throughout the summer with various parts, including the title role (Sugar Kane) in Sugar, a musical based on the Marilyn Monroe film, Some Like It Hot. (Seriously, so amazing!) Another offered me the role of swing in a review that plays 18 shows per week in a resort. The “swing” is the person who—impossibly, I think—learns all four roles of the regular female (or male) cast and then alternates stepping in. (Seriously, how do people do that?)

Ultimately, however, I had to turn them all down. One didn't seem a good fit, two overlapped with the start of school in the fall, one conflicted with a film offer I had already accepted, etc. It is so hard not to accept great work offers. I am so grateful to the companies that had such faith in my abilities! I wish all these companies the best this summer!

Note: My older sister, Alana Jeffery, will be performing in Sundance Summer Theater‘s rendition of The Music Man. She is so über-talented and funny. I cannot wait to see her play Maud Dunlop. If you're in the area, get tickets and cheer her on!