After four long months—yes, months!—of auditioning, I finally learned on August 4th, that I have been cast as Julie Flinders in the upcoming full feature film of Saturday's Warrior. The original Saturday's Warrior was a smash hit stage play in the 1970s and is something of an LDS culture classic. 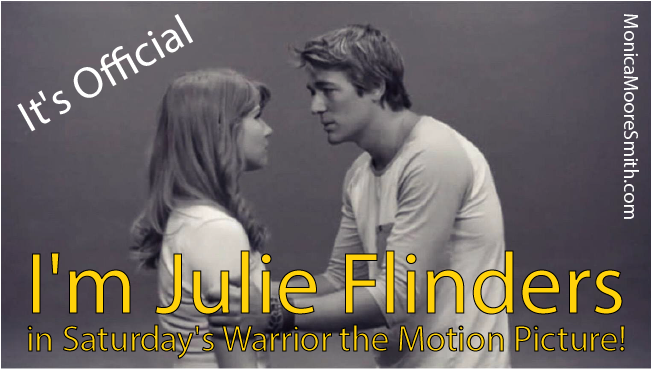 My first audition was by video, when I was with my dad in Florida. My last callback was for three hours on my 18th birthday. In between there were multiple calls to sing and to read with various Wally Kestler prospects. That last birthday callback was the first time I read with any potential Tod Richards.

During one of the spring callbacks, they asked various actors what colleges they attended and what their majors were. When they got around to me I murmured, “Um…ah…high school?”

When I got home, I told my mom that it probably killed my chances. Much to my surprise, they kept calling.

On August 3rd, I was called me in for a “chat.” That was baffling, I had no idea what that meant. Was it another audition? Did they want me to dye my hair? Did they want me to not be barely 18? Were they going to sit me down and tell me that they really thought I was fun, but…well…it's a no.

So I drove to nrevously to the studio in Midvale—as I had many time before. When I walked into the room I presented as the new Julie Flinders! I know they filmed these offers, so I hope I get to see them on the DVD reel.

Without a doubt it was the most arduous audition process I've been through, but so worth it!

Since that day, I've been holding off announcing until it was kosher to talk about it. Today, the producers posted a Kickstarter campaign. Since I'm in the promotional video—along with the new Tod, Mason Davis—I guess it's public knowledge!

While I can't seem to embed the Kickstarter video, you can see a shot of Mason and me in our screen test at about 1:15. This is going to be amazing!